You are here: Home / Android / How to change Aspect ratio on the AC3 Player (Android)

How to change Aspect ratio on  the AC3 Player (Android) while watching a video or a movie to an aspect ratio that is conformable to your screen or monitor
Aspect Ratio is an image attribute or characteristics that tells the dimension (relationship) between the width and height of an Image.
The Aspect ratio is mostly rectangular, but there are square based aspect ratio.
The Aspect ratio from its name entails that it is a ratio, which is in form of mathematical ratios, that is expressed by two numbers separated by a colon, for example 4:3.
If expressed as in the form x:y, x is the width, while y is the height, that is in the form
Width: height
Below are some popular aspect ratio and where they are used:
1:1: Square form
4:3(1.33:1): Traditional television screen or computer monitor standard
16:9(1.77:1): (HDTV) High definition Television, US digital broadcast TV standard, it is the most popular aspect ratio.
21:9: In use in theaters and cinemas.
16:10(1.6:1 or 8:5): Common Computer Screen ratio
1.85:1: Widescreen cinema standard especially in the US
21:9: in use in theaters and cinemas.
2.21:1: Used in cinemas
2.35:1: Widescreen cinema standard
2.39:1: For Cinema screen
5:4(1.25:1): Early television and large format computer formats
To change aspect ratio on AC3 Player, please follow the instructions below:
1) Launch AC3 Player with the Video you want to watch and use a different aspect ratio. 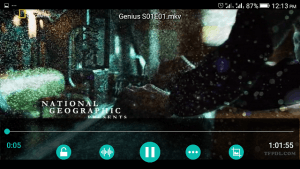 2) Touch the screen of the player, the last option on the right, Click on it (Where the red box is). 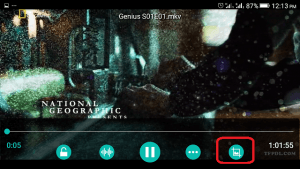 3) Pressing it frequently will be changing the aspect ratio, when it has gotten to the one required, stop pressing the option.
Hope with this, you have been able to change the aspect ratio available on the AC3 Player (Android).
Please Share and Comment below.