There were days when you could only do advanced photo editing on desktop computers. Right now, with the improvements in performance and hardware of mobile devices, photo editing can be done on them. Whether you need to enhance the look of your photo for that Instagram post or you just want to try your creativity out and play around with design tools, we’ve got apps here that can help you with photo editing on your Android device. 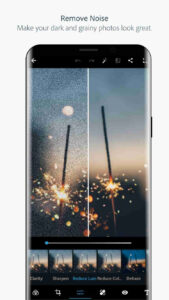 Photoshop Express starts the list of the best photo editor for Android and it is truly one of the best. The powerful app lets you quickly and easily do photo edits. The app is loaded with features like rotate, flip, crop and straighten for photos. Photoshop packs one-touch filters, a bunch of effects, auto-fix, colours, frames, and advanced tools such as image Rendering Engine that works on panoramic photos. It boasts of Noise Reduction feature which helps to minimise specklimg and unwanted grain in night photos. The app can be downloaded and used free, and is ad-free too. There are various sharing options in Photoshop Express, like Facebook, Twitter and other social networking platforms. 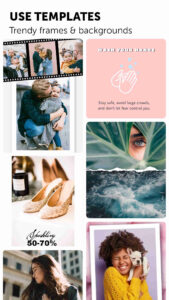 PicsArt is a complete solution for photo editing. It’s one of the best free photo editing apps for Android. It has many features bundled into it. Talk of the collage maker, camera, and variety of tools it has, PicsArt is a fun to use app. It has a free version as well as a premium version. The premium version is known as PicsArt Gold and it requires you to part with some money to get it. The premium version boasts or awesome frames, collages, stickers, and fonts. The collage maker gives you access to more than 100 templates which are free to use. There are a bunch of powerful tools which lets you create cutouts, crop images, clone, stretch, add text to images and adjust curves. 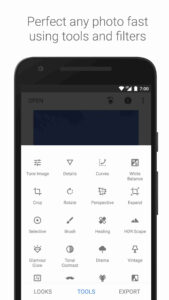 Snapseed can be likened to a professional software for editing photos, but it is made specifically for Android Smartphones. Developed by Google, it is built with tons of editing options that will bring every photo to life. It features a host of sliders that put you in control of your images. With this sliders, you can tweak any photo’s temperature, blur, vignette, and others. It also features effects such as 1960s-style film looks, grain or Retrolux filter. It boasts of stack effects, just like you have layers in Photoshop. Stack effects makes it possible for you to make new result each time a photo is edited. Advanced options, like healing brush, curves, perspective crops are also loaded in the app. With all these features, you don’t need to have multiple apps on your device to edit photos. 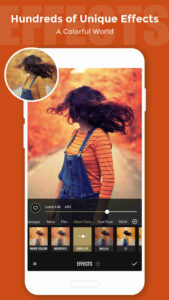 Fotor is another app suitable for editing photos on an Android device and is also one of the best apps around. The photo editing app boasts of cool tools and features to make photos look better. There are tons of great photo filters and effects useful for enhancing images. There are over 10 customisable Edit functions for adjusting exposure, brightness, contrast, and other attributes. The photo editor also has a collage maker with plenty of templates. It is a free-to-use app, but is ad-supported. It boasts of an Enhance feature that has a Slide on Screen capability to help you adjust photos instantly. In all, it is a feature-rich photo editing app. 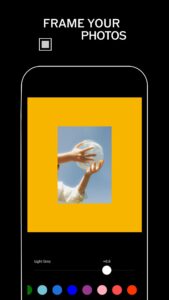 VSCO is a photo editing app with a purpose to making your photos look more like film. The app has a host of filters and you can buy packs of presets, each with their own beautification. Aside the filters, there are a bunch of editing sliders to tweak different attributes, from skin tone to exposure. However, it does not have option for editing features like healing brushes, burning and dodging. VSCO also has an active community built-in the app having professional and amateur photographers who share their works and ideas. VSCO packs professional tools which is suitable for both novices and professionals.

Hope with this, you have learnt the top 5 Best Photo Editing Apps for Android.