How to change Aspect ratio using the Bomi Player using keyboard shortcuts and the right click while watching a video or a movie to an aspect ratio that is conformable to your screen or monitor.Aspect Ratio is an image attribute or characteristics that tells the dimension (relationship) between the width and height of an Image.

The Aspect ratio is mostly rectangular, but there are square based aspect ratio.

The Aspect ratio from its name entails that it is a ratio, which is in form of mathematical ratios, that is expressed by two numbers separated by a colon, for example 4:3.

If expressed as in the form x:y, x is the width, while y is the height, that is in the form
Width: height

Below are some popular aspect ratio and where they are used:

So let’s see how to change or set aspect ratio for the Bomi Player using the different methods listed below:

By default, the Aspect Ratio keyboard shortcut is not set in Bomi Player, so we are going to set it. Let’s begin:

7. The Modify shortcut window will open named bomi.
8. Hold down or press any key or a combination of keys you wish to use as the always on top shortcut, be careful not to press in use keyboard shortcuts (I chose Shift + F2).
9. Click on Ok on the modify shortcut window, then click on Apply and close the Bomi Player Preferences window. 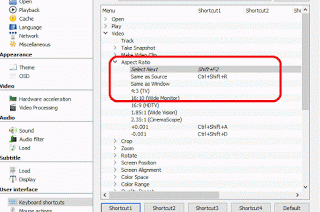 10. Now you can continue using your selected keyboard shortcut to change the bomi player aspect ratio.

Hope with this, you have been able to change the aspect ratio available on the Bomi Player.