So, today we going to learn how to fix audio and video out of sync using the Bomi Player.

Syncing of audio and video are processes that should have taking place during the editing process. Most modern and good budget movies do not usually come with this problem, but old movies and some hard coded movies when been converted do have this syncing error. Some poorly edited movies and just some recorded speeches might come having this problem.

In fact, some of the audio and video sync (synchronization) problem might occur due to change of frame rate while editing or when converting the video from one format to another.
So this tutorial will guide us on how to fix audio and video out of sync with the Bomi Player using keyboard shortcut or hotkeys.

Using keyboard shortcut keys will not generally affect you while watching the video and it will be faster, so let’s get started.

The keyboard shortcut or hotkeys required for this process are ] and [using the timing of 2.0 seconds.

[ : Stands for audio delay down, should be used when audio is faster than video, it reduces audio speed or timing by 2.0 seconds. 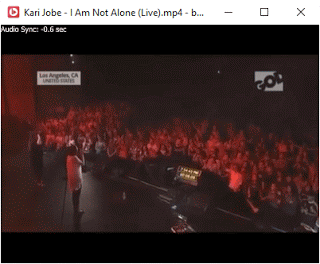 ] : stands for audio delay up, should be used when audio is slower than video, it increases audio speed or timing by 2.0 seconds.

So hope you have been able to fix your out of sync audio and video using the Bomi Player.

Hit back at me at comment section for any problem faced.