The Bomi Player has a way to solve this problem, in fact using Hotkeys or Keyboard Shortcut Keys. But first let’s learn how to load subtitle into Bomi Player in order to be able to sync or synchronize the subtitle perfectly.

1. First of all, launch the Bomi Player. (Open the video, you want to synchronize (sync) the subtitle).
2. Right Click on the Bomi Player Window, Click on Subtitles and then Click on Track then Click Open File OR Press Shift + F on Keyboard. 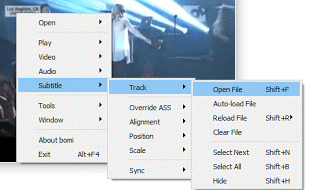 3. A window will open, go to the location where downloaded subtitle was kept or where the subtitle file is and select it in order to load it by clicking on Open

In order to sync the subtitle for the Bomi Player, This is what you are to do:

Keyboard shortcut or hotkeys are used to sync or synchronize subtitle in the Bomi Player. These shortcut keys are: