Security is a thing of utmost importance. Though Apple puts in great efforts in making your iPhone secure, a VPN will do much better when it comes to online security. It will add an extra layer of security to your iPhone and protect you from cyber treats, cyber criminals and malware. What’s more? A VPN app will help you bypass restrictions around certain apps and services, so that you can utilise these services. In this guide, we cover the best VPN apps for iPhones and iPads.

For a VPN for your iPhone, you can choose ExpressVPN. The app is easy to use, and is similar to the look on other platforms. The features are easy to access on the interface. Beginner and expert users can find the interface useful. There are over 3,000 servers scattered around 94 countries thus offering you reliable connection. Your connectionis secured by industry-standard AES-256 encryption and there’s a kill switch feature. There’s also an excellent customer service which will support you via its 24/7 live chat. However, we wish Express VPN had allowance for more simultaneous connections. It only features five at the same time.

NordVPN is one of the best VPN apps for Android. The features are laid out on an organised layout. It has “Quick Connect”, a feature that shows you the closest server, load percentage, and availability. There’s also the auto-connect feature, a feature that alerts you when are connecting to an insecure WiFi. There’s even more: Siri capability, speciality server lists, protocol menu and more. NordVPN boasts of 256-bit encryption to ensure optimum security, as well as automatic kill switch. That’s not all with security. There’s also double data encryption, and no logs policy. NordVPN has the ability to bypass geo-restrictions letting you watch Prime Video, Disney Plus, BBC iPlayer and more. 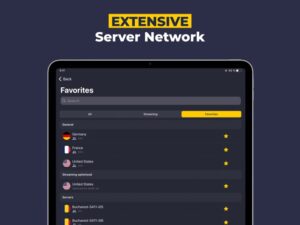 CyberGhost is another solid VPN app featuring 8,134 servers in 90 countries. There’s even focus on streaming-optimised servers with the iOS app having dedicated servers for streaming platforms in various countries. You can easily bypass restrictions by Netflix US, Hulu, and Disney+. There are also advanced security functionalities such as AES 256-bit encryption, a kill switch, IP/DNS leak protection, and more. It also protects you from an insecure WiFi. CyberGhost also has an ad and malware blocker protecting you from security threats. CyberGhost boasts of the security protocols: IKEv2 and WireGuard which are powerful and secure protocols in their own rights. The app has strict zero-logs policy thus protecting your data. 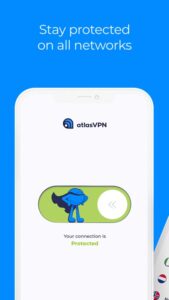 Another excellent app to enjoy anonymous connection is Atlas VPN. It has an easy-to-use and straightforward interface suitable for novice or expert users. There’s also a free version if you’ll love to try out things before committing to the premium version. There’s the SafeBrowse feature which blocks malicious websites and app like a antivirus. Though it doesn’t have all of the features an antivirus has, it will help you stop phishing and malware from invading your iPhone. It boasts of a system-wide kill switch perfect for all-round security. Atlas VPN also supports many streaming services, offering great speed. It also has the fast and secure WireGuard protocol. 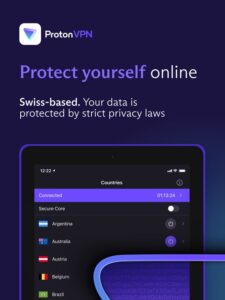 Proton VPN is yet another excellent VPN pick for Android. It has a free version which can give you some good features for free. Proton VPN will provide you with unlimited bandwidth for free. There are also servers that exists in the United States, Netherlands, Japan and more countries. The VPN service boast of over 1400 servers in over 60 countries all available on the paid subscription. There’s support for P2P servers, torrenting, always-on VPN/kill switch, and more. Proton VPN also has solid encryption including AES-256, 4096-bit RSA, and HMAC with SHA384 encryption. With Proton VPN, you can connect up to 10 devices at once. The service will also allow you to use streaming services such as Netflix, Amazon Prime, Hulu, Disney+, and more.

The best VPN apps are reliable and provide extremely secure connections even if you’re connected to a public WiFi. They also let you have access to websites and apps you shouldn’t access ordinarily. They are a good addition to the security that your iPhone provides. We hope you found this guide helpful? If you did, kindly leave a comment and don’t forget to share..